How To Use Your Office Holiday Party To Advance Your Career 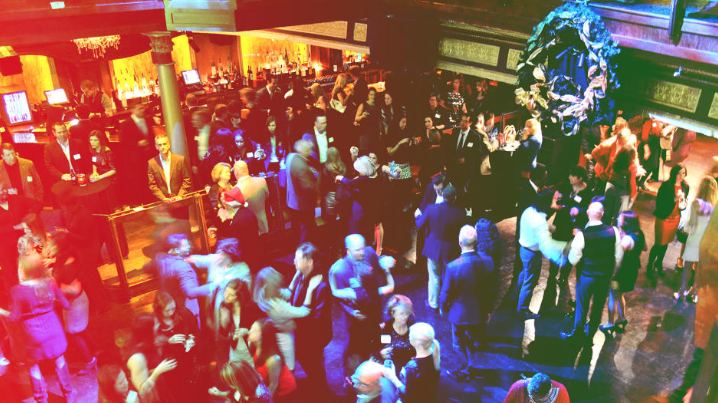 Instead of drinking too much and embarrassing yourself at your company’s party, use it as a time to talk to new people.

We’ve all heard office holiday party horror stories. Drunken coworkers committing faux pas that become watercooler gossip on Monday morning. Instead of simply surviving the night without embarrassing yourself, seize the day and advance your career.

“Consider the office party as the best opportunity annually to speak with people you normally have limited exposure to,” says Caroline Stokes, founder of the executive search and coaching firm FORWARD. “The person working the room seeing how others make an impact within the company and maybe sharing commonalities will be making authentic strategic alliances for the challenges in 2017 and beyond.”

Holiday parties are unique events because they allow titles and organizational levels to fall away, says management coach Jeffrey Kelly. “This lets anyone interact with just about anyone as long as they are providing half of a conversation of value,” he says. “So, it is a great opportunity to build relationships with people who influence the company.”

It’s best to build a game plan. Here are seven tips for using the company holiday party to boost your career in 2017:

1. DO YOUR HOMEWORK
Find out who is attending and ask the host if he or she will give you couple of key warm introductions based on your goals, suggests Judy Robinett, author of How to Be a Power Connector. You can also think about people who will be at the party that are natural connectors and try to be their “wingman,” she adds.

“Do your homework on your management team,” he says. “Are they golfers or art lovers? Show genuine interest by reading on the subject and spark up conversation.”

2. GET THERE EARLY
It can be tempting to wait until the party is going before you make your entrance; it can feel awkward to be the first to arrive. But you want to make those great connections and have those great conversations while everyone is still lucid, says Jones.
But avoid the alcohol. “Club soda with lime or Sprite in a cocktail glass are great ‘mocktails,’” he says. “If everyone else is drinking, your hand should be full, as well. It’s all about the glass.”

3. SET A NUMBER OF PEOPLE TO MEET
Taking the time to approach people will make a positive impression and can open doors over the coming year, says Stokes. Introduce yourself to people you haven’t met in person or who work in other departments.

Related: These Are The Most Important People In Your Network At Each Stage Of Your Career

Introverts might want to ease the difficulty by setting a target number of people, such as five,” says Stokes. “An extrovert might connect with 10 or 20,” she adds. “This isn’t a competition; it’s about making meaningful connections and being human.”

4. GIVE PROPS TO THE BOSS
During the party, find the company president or CEO and personally thank them for hosting the event, says Kolby Goodman, career and networking consultant at The Job Huntr.

The holiday party is not the time to discuss your vision or company goals, “hence the word party.”

“They may not have been the person to set everything up, but they did play a pivotal role in making sure the company was afloat to have the party in the first place,” she says.

The holiday party is not the time to discuss your vision or company goals, “hence the word party,” says Jones. But be sure to be authentic, adds Robinett.

“All transactions at their core are personal,” she says. “People must know you, like you, and trust you. Talk about your pets, family, or a great new book your reading. If business comes up that’s okay, but it’s not the best starting point.”

6. LEAVE AT A REASONABLE TIME

Don’t be the last man standing, says career coach Heather Monahan. “It’s great that you attended the party and networked and made a solid impression, now get the hell out of there,” she says. “Once you have seen a few people leave, it is time for you to make your excuse known and get out. Nothing good happens at the end of the night.”

Develop a simple strategy for following up with new connections after the party. “Follow up within 24 hours saying you enjoyed meeting and chatting, and that would like to grab coffee after the holidays,” says Robinett.

Also follow up with the people who organized the party, even if you already thanked them at the event, says Goodman. “Email them on Monday and thank them again,” she says.