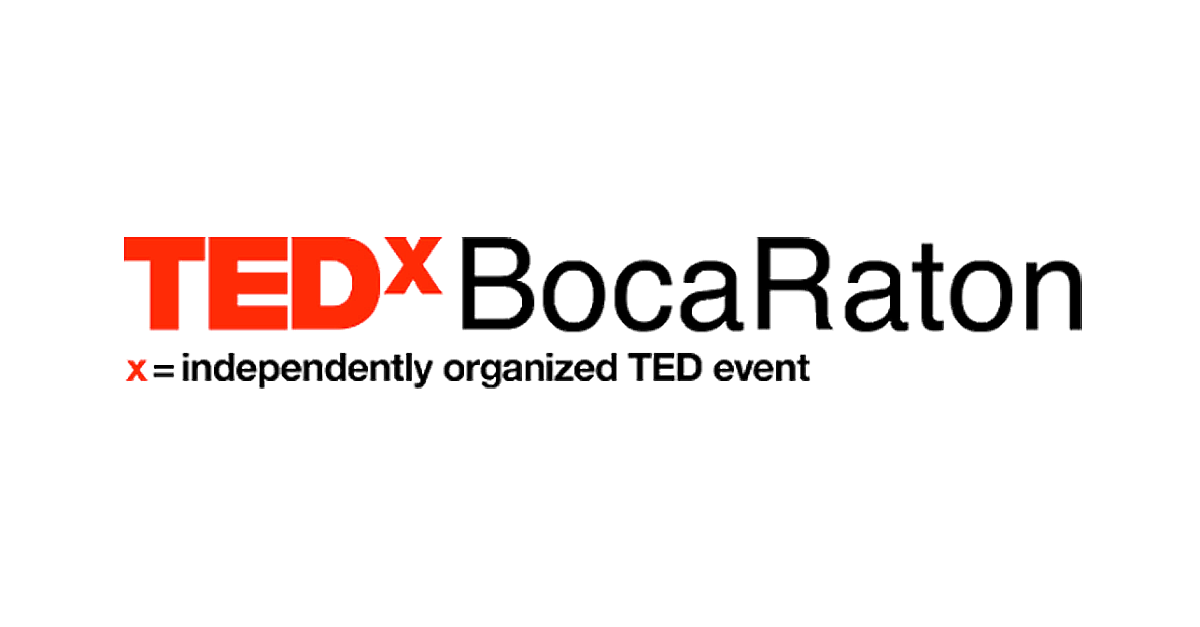 BOCA RATON, Fla., Sept. 30, 2019 /PRNewswire/ — TEDxBocaRaton today announced the official list of 14 speakers to take center stage at Florida Atlantic University on Saturday, October 26, 2019. The highly anticipated, destination event of the year in Boca Raton brings an impressive line-up of speakers who will address this year’s theme of Rethinking Relationships. This year’s thought-leaders come from organizations like Disney, HubSpot, IBM, MIT, and more.

The speakers will examine how paradigm shifts in behavior, technology and global influences impact our significance as individuals and connected beings.

Price includes admission, food/beverage and are available at https://tedxbocaraton.com/

Erik Mintz, TEDxBocaRaton Organizer is taking his knowledge, network, and passion to spearhead a high-caliber series of speakers sure to make TEDxBocaRaton an acclaimed experience. The independently produced event, operated under a license from TED, presents a program of discussions, demonstrations, and performances by leading thinkers, innovators, artists, philosophers and entertainers from diverse fields such as technology, the arts, ecology, education and more.

This year’s speakers include:

Dr. Bertrhude Albert – Nonprofit, P4H Global – Dr. Albert is the Co-Founder and CEO of P4H Global. P4H Global’s goal is to train people to transform nations. A Haitian immigrant, she is committed to seeing Haiti rise to its full potential and destiny through sustainable development and human capacity.

Dr. Dave Bradley – Inventor of Ctrl-Alt-Delete – Affectionately known as “Dr. Dave,” he is best known as the inventor of the infamous three-key sequence, Ctrl-Alt-Delete, as well as being one of the team of 12 engineers to develop the IBM Personal Computer in 1981.

Scott Brinker – VP, HubSpot – Scott Brinker is Vice President Platform Ecosystem at HubSpot, helping to grow and nurture the company’s community of technology partners. He writes for Chiefmartec.com blog and serves as the program chair of the MarTech Conference Series.

Dr. Deborah Donnelly-McLay – Airline Captain, UPS – Dr. Deborah Donnelly-McLay is currently an international Boeing 767 airline Captain with United Parcel Service. She has been able to utilize her experience and education in aviation to lead the Harvard Pilot Health Survey and presented her aviation research at MIT/Molecular Frontiers Science Symposium.

Fred Guttenberg – Entrepreneur & Activist – Fred’s professional life includes over a decade of sales and management with Johnson and Johnson, as well as owner of multiple franchises. He founded Orange Ribbon’s for Jaime in honor of his daughter Jamie who lost her life at the Parkland school shooting in 2018.

Indigo Dreamers – Musicians – Coming from different corners of the world, Jamie Craig, a South Florida native, and Pouya Pourtahmasbi, an Iranian transplant, serendipitously met while studying music at Florida Atlantic University. The pair found a way to meld their contrasting styles and unique backgrounds into a sound that was truly their own. This was the birth of Indigo Dreamers.

Heather Monahan – CEO, Boss In Heels – Having successfully climbed the corporate ladder for nearly 20 years, Heather is one of the few women to break the glass ceiling and claim her spot in the C-suite.

Duncan Wardle – Former VP Innovation, Walt Disney – Duncan and his team helped Imagineering, Lucasfilm, Marvel, Pixar and Disney Parks to innovate, creating magical new storylines and experiences for consumers around the globe. One of his many innovative claim-to-fames at Disney includes partnering with NASA to transport Buzz Lightyear to (and from) the moon.

Dr. Priscilla Zelaya – Nonprofit, P4H Global – Dr. Zelaya is the Co-Founder and CFO of P4H Global. P4H Global’s goal is to train people to transform nations. Her experiences in Haiti, Nicaragua, and in the classroom have solidified her conviction that education can end poverty.

Kathryn Edmunds is the on-stage host during TEDxBocaRaton. She is a Graduate Research Assistant at Texas A&M University. Kathryn was recognized as the Collegiate Servant Leader of the Year Award by the World Leaders Group for her work as Student Body President at Florida Atlantic University.

The link to the speaker’s full bios can be found at TEDxBocaRaton..com

About TEDxBocaRaton
x = independently organized event. In the spirit of ideas worth spreading, TEDx is a program of local, self-organized events that bring people together to share a TED-like experience. At a TEDx event, TED Talks video and live speakers combine to spark deep discussion and connection. These local, self-organized events are branded TEDx, where x = independently organized TED event. The TED Conference provides general guidance for the TEDx program, but individual TEDx events are self-organized. (Subject to certain rules and regulations.) For more information visit TEDxBocaRaton.com

About TED
TED is a nonprofit organization devoted to Ideas Worth Spreading, often in the form of short talks delivered by leading thinkers and doers. Many of these talks are given at TED conferences, including our annual gathering in Vancouver, as well as TEDWomen, intimate TED Salons and thousands of independently organized TEDx events around the world. Videos of these talks are made available, free, on TED.com and other platforms. Audio versions of the talks from TED2019 will also be published to TED’s podcast TED Talks Daily, available on Apple Podcasts and all other podcast platforms.

TED’s open and free initiatives for spreading ideas include TED.com, where new TED Talk videos are posted daily; TEDx, which licenses thousands of individuals and groups to host local, self-organized TED-style events around the world; the TED Fellows program, which selects innovators from around the globe to amplify the impact of their remarkable projects and activities; the Audacious Project, which surfaces and funds critical ideas that have the potential to impact millions of lives; TEDSummit, which gathers the most engaged members of the global TED community for brainstorms, discussions, performances, workshops and an eclectic program of mainstage talks; and the educational initiative TED-Ed. TED also has a library of original podcasts, including The TED Interview with Chris Anderson, Sincerely, X, and one of Apple Podcasts’ most downloaded new shows of 2018, WorkLife with Adam Grant.