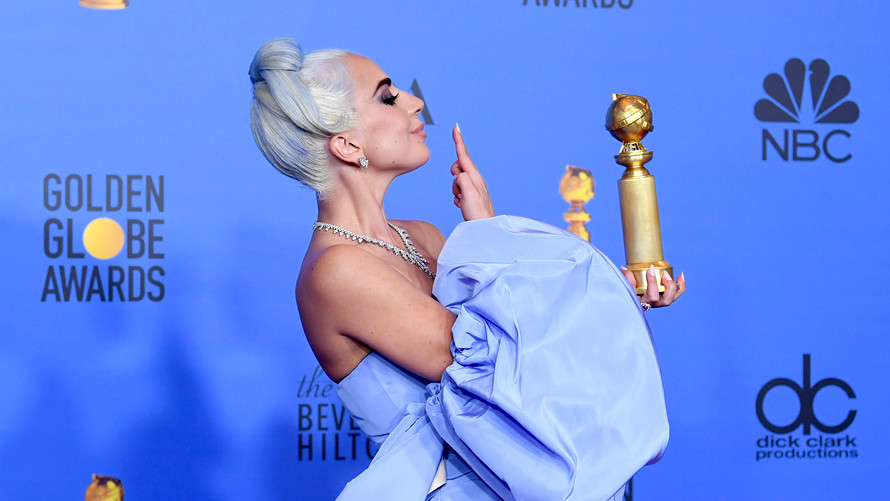 Here can be victory in defeat

Lady Gaga and Bradley Cooper’s “A Star is Born” was considered a shoo-in to sweep the Golden Globe Awards on Sunday night by outlets including the Los Angeles Times, the New York Times and Vanity Fair. Instead, the actors sat smiling in the front row while “Bohemian Rhapsody” and “Green Book” took many of the top awards, and Glenn Close upset Gaga for the Best Actress nod. Gaga did share the Best Original Song award for her hit “Shallow” from the film, however, and expressed her gratitude — and her support for Close — on Twitter afterward.

“I am so beyond grateful for this Golden Globe & honored to have won it w/ @MarkRonson @Wyattish, Anthony Rossomando and to have sang it with Bradley Cooper,” she wrote. “I also could not be happier for Glenn Close winning tonight. She is a true legend and deserves every award. Thank you HFPA.”

Aliza Licht has also experienced public disappointment. After 17 years doing PR for DKNY, she started her own consulting firm in 2016 — but after 10 months, she realized it wasn’t working out. Rather than sulking, she shared what she learned from her loss in her article, “This Is How You Know You’re Not Meant To Be An Entrepreneur” for Forbes.

“Own up to it. There’s no reason to hide it. It’s nothing to be ashamed of; everyone has failures,” the author of “Leave Your Mark,” told Moneyish. “It’s embarrassing for a minute, and then everyone moves on. And you’re onto the next thing, too.”

SEE ALSO
How to Brew Better Coffee at the Office

After all, Gaga still has plenty of chances to rebound; she’s been nominated for five Grammys, which air next month, including four for “Shallow,” and she and Cooper could still score nods when the Oscar nominations are announced on Jan. 22.

Many pro athletes have also mastered the art of being good sports. When Japan’s soccer team was eliminated from the World Cup last summer, they came out looking like winners by bowing to their fans in the stands after the devastating loss to Belgium. They also cleaned their locker room on the way out, CNN reported, and left their Russian hosts a thank you note (written in Russian) inside the now-spotless changing room.

And the players weren’t the only good sports. Japanese fans have stayed after every one of their team’s matches at the global soccer tournament to help clean their section of the stadium, leading Sports Illustrated to say the losing team has actually “won the World Cup.” Senegalese fans also tidied up their stadium section after beating France a couple of weeks ago.

And the year before, Los Angeles Dodgers pitcher Rich Hill just missed throwing a no-hitter last summer, when he gave up a walk-off home run against the Pittsburgh Pirates in extra innings on his 99th pitch; losing the game. Hill also just lost out on a perfect game after the third baseman made an error in the ninth inning. But when Hill approached the press afterward, he gamely stuck up for his teammate, and vowed to come out swinging. “I’m looking forward to tomorrow, getting in the gym and getting ready for the next outing,” said Hill. “We have a lot of great things going on here. Tomorrow is a big game. We have to take the series and get back home.”

Now that’s how you handle a loss like a boss.

“Everyone likes to be around a winner – and that doesn’t mean the person that wins the most games,” career coach Heather Monahan, aka The Boss in Heels, told Moneyish. “That means the person with the winning attitude.”

Liza Bychkov-Suloti, a partner at the SHADOW public relations and marketing company, agreed. “Sometimes the way you accept defeat or adapt to change is just as, if not more, meaningful than how you succeed and control any outcome. Supporting those that are successful or ‘win’ reflects a strong, confident character,” she told Moneyish.

No one’s perfect, and it’s inevitable that we’re all going to bomb a sales pitch, presentation or some other work project at some point, or be on the losing team. So here’s what we can learn about turning a loss into a win, especially when all eyes are on us.

If you never lose, it means you’re not taking big enough risks. Everyone knows Gaga is an accomplished singer and songwriter; she’s got six Grammys under her bedazzled belt. But she took a chance with “A Star is Born” — it’s not only her movie debut, but she was also directed to strip off her signature makeup to completely expose herself. “When my character talks about how ugly she feels — that was real,” Gaga told the Los Angeles Times. “I’m so insecure. I like to preach, but I don’t always practice what I preach.” Licht added that, “It’s essential in life to take risks. People shouldn’t be afraid to fail, they shouldn’t be afraid to try, because not trying really is the ultimate failure.”

Accept what you can and can’t control. Dr. Jonathan Fader, director of mental conditioning for the New York Giants who was the New York Mets’ team psychologist for nine seasons, told Moneyish that recognizing what is and isn’t in your hands helps to just let it go when it doesn’t work out. “Nolan Ryan once said that a pitcher has two jobs: To choose the pitch and to execute it. What happens after that is out of your hands,” Dr. Fader said. “Likewise, if you’re a trader, you can pick this stock based on all of the statistical variants you know, but you don’t have any control over unexpected bumps in the market,” which can send your stock plummeting.

Take a beat to reset yourself. So exactly how do you “shake it off” or “let it go?” Dr. Fader coaches players in mental conditioning and mindfulness to do a quick “reset” right after something goes wrong. “When you watch baseball players closely, you’ll see the pitcher or the batter taking a deep breath before each pitch, or looking at a focal point, like a blade of grass or a flagpole, to center themselves,” he said. “Approach each moment independently.” So if an interview isn’t going well, or you get off to a rough start during a presentation or performance, just focus on something in the room, take a deep breath and start over.

Embrace a new perspective. Dr. Fader’s players also practice gratitude, which helps them to be good sports through wins and losses. And again, see Gaga’s very gracious posts thanking the Hollywood Foreign Press Association and congratulating Close on Twitter and Instagram. “If you think, ‘I am so grateful that I get to compete at the highest level,’ the one or two negative results don’t loom as large,” he said. Apply that same approach to your job – you’re lucky that you get to do what you love, or you’re blessed to have a gig that supports your family, or you’re working with a great team. That appreciation can help you take setbacks in stride.

Build resilience. Losses feel catastrophic in the moment, so look at the big picture: You’ve survived worse, and you can survive this, too. “While dropping the ball on a new account and taking a professional hit can be difficult, that can never compare to other personal challenges in your life that you have overcome,” said Monahan, who suggests keeping a journal of the tough times you’ve already handled. “Reminding yourself of traumatic situations that you have lived through will bring your strength and the ability to see your current situation as less than dire in the moment.”

Take action. Hill didn’t dwell on the perfect no-hitter that wasn’t. He told the press that he was already looking to Thursday night’s game, and planning to hit the gym. “The decision to take action and change your situation is the single most impactful thing you can do,” said Monahan.  “What action can you take today to change your situation and set you up for success the next time opportunity knocks on your door?”

Bychkov-Suloti agreed. “Don’t shy away from examining your opportunity to learn and grow,” she said. “Ask your boss (or the decision maker) for further background on the decision and the steps they’d like to see you take to achieve your goals.”

This article was originally published in 2017 and has been updated with the 2019 Golden Globes.

See the world with cash-color glasses. Get a weekly digest of personality finance: features, pop-culture and essays. Sign up here.

RT @kellisontaylor: Closing keynote is @_heathermonahan for the AICPA Women's Global Leadership Summit. It was great to meet you in person!…
View on Twitter